For Every Task a Fitting Camera

The various application areas of digital picture processing systems place different requirements on the used camera technology. Therefore, for every task the best fitting type of camera must be chosen. The company Stettbacher Signal Processing AG offers various series of cameras for this, which complement each other functionally and can thus cover a wide range of tasks with identical interfaces.

The task area and the number of cameras in the industrial automation and machine vision constantly increase. At the same time, more and more application fields for cameras open up, e.g. in the fields of surveillance and smart home. For these diverse tasks Stettbacher Signal Processing AG (SSP) has offered high quality and flexible O-3000 camera series and O-3000 vision box for many years.

Picture 1: The O-3000 Camera Series is Available in Various Versions.

To cover a wider range of application fields the product line was extended by the O-3100 cameras, which are available now. From the outside, they look pretty much the same, which is intentional, because the O-3100 products are totally compatible with the O-3000 cameras when it comes to hardware. They also provide the same objective options, ports and attachment options. Besides this, the O-3100 series inherits all advantages from the O-3000 series, like the disclosed interface, the free availability of open-source drivers and demo applications. The main difference between the two camera series lies within, with their functional strengths.

The O-3000 cameras are so-called rolling shutter cameras, which stand out for their low ground noise (SignaltoNoiseRatio > 43 dB). Therefore, they are very suitable for detailed scenarios for the display of fine color and brightness nuances and for close grained recordings with bad lighting. But the particular strength lies in the special HDR mode (High Dynamic Range) with which the displayable dynamic, meaning the imageable span from the darkest to the brightest picture area, can be increased many times over. In the HDR mode a dynamic of over 115 dB is reached, which is equivalent to about 20 Bit per pixel. As the following example shows, HDR technology can be used to achieve images in which both extremely bright and extremely dark areas still have high contrast resolution and are neither overexposed nor underexposed.

In the following experiment, a picture of a shining light bulb was taken in front of a chessboard checkered background. Using the normal linear recording mode the chessboard’s exposure was correct. In contrary to that, the light bulb was overexposed and only appears as a white patch. Neither the glowing spiral nor the chessboard background behind it could be recognized.

In HDR mode the scenery is recorded with several exposure times. Clever algorithms generate a single and balanced picture from it. This prevents the overexposure. Both the light and the dark details remain in the picture. This way the inner light bulb, including the glowing spiral and its reflection on the glass body, as well as the checkered chessboard behind it become clearly visible.

The O-3000 cameras have a Rolling Shutter. This means, the pixels of the sensor are exposed line by line one after the other during readout. There is no distortion with these cameras, even with quickly moving or rotating objects. Sharp and undistorted pictures are possible with very high speeds too.

In the following example, a rotating fan was captured with the O-3000 and the O-3100 camera. This clearly shows the differences between the rolling shutter and the global shutter technology. The fan rotates with approx. 10 rpm. The wing tips reach speeds of about 3 m/s. To the naked eye, the roto blades are indistinguishable. To illustrate the recording quality, one of the rotor blades was barcoded. This scenario is exemplary for many applications in industrial automation, where moving objects must be recognized and classified in a very short amount of time.

The rolling shutter technology soon reaches its limits in this task. The rotor blades of the fan are distorted at the high speed of rotation, and the barcode is severely deformed. This is known as the "rolling shutter effect". It is caused by the individual image lines being exposed and read out one after the other. Moving objects change their position during this time, which leads to visible distortions depending on the speed of the object and the exposure time of the camera. In the image, these effects are remarkable. 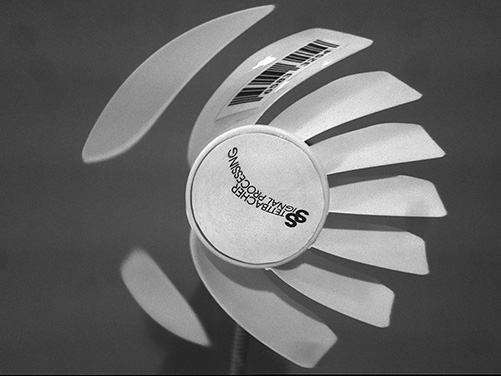 With such an application the advantages of the global shutter technique appear clearly. With the O-3100 camera the sharp and undistorted recording of the fan in rotation succeeds, thanks to a very short exposure time of 200 µs. The barcode becomes clearly readable despite the high speed and can be evaluated by a picture recognition system without any problems. 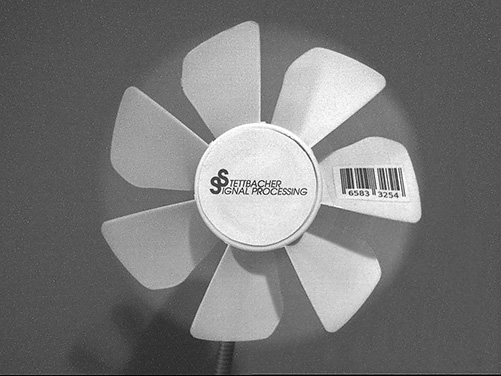 A Fitting Solution for Every Application

SSP’s portfolios offer the perfect camera solution for every application. For applications requiring a high dynamic and both light and dark areas must be displayed recognizably and with high-contrast, the O-3000 series with its powerful HDR mode is offered. This may be in the surveillance field, where there is often poor lightning conditions due to solar radiation.

For the sharp and undistorted recording of quickly moving or rotating objects the O-3100 camera series with global shutter is recommended. Possible applications would be, for example, quick control and sorting functions in industrial productions or traffic monitoring.

SSP’s cameras differ greatly from the competition. All drivers and demo programs are open-source. All software is freely available and there are neither bothersome license fees nor does the customer need to buy expensive programs, that may nevertheless be unpractical. Together with the mighty open-source picture processing library OpenCV the cameras from SSP make an interesting base for flexible and inexpensive vision solutions. The cameras are hardware and software compatible among each other and are exchangeable without any problems.