All About Automation Trade Fair 2022 Friedrichshafen

Stettbacher Signal Processing AG at the All About Automation exhibition

After more than 25 years in business, the engineering company Stettbacher Signal Processing AG (SSP), which specializes in sophisticated customer solutions, has a lot to show. Wouldn't it be about time to participate in a trade fair as an exhibitor? Yes, if the Corona virus finally allows it ...

The cars were already loaded, the customs formalities prepared, the hotel rooms reserved - then came the cancellation: The All About Automation trade fair 2020 in Friedrichshafen on Lake Constance was postponed at the last moment to the following year due to the pandemic. The disappointment was great, because after hundreds of hours of preparation and stress, the tension had finally given way to anticipation and also a certain pride. What they had loaded into the cars was something to behold.

But just, they wouldn't be able to show all that until 2021. At least, that's how it was hoped. Of course, things turned out differently and the show couldn't take place the following year for the same reason. Now All About Automation is planned for April 5 and 6, 2022 in Friedrichshafen, and the prospects are currently favorable that it could work out. Although an All About Automation trade show is also planned in Zurich for the first time this year, SSP will still participate in Friedrichshafen because the event there will be much larger.

The highlight SSP will show at the fair is its autonomous test vehicle. Driving on a table, it constantly follows a path, never coming too close to the edge of the table thanks to millimeter-precise positioning. If obstacles are placed on the table, the vehicle swerves autonomously and elegantly to return to its original path. If swerving is not possible due to space constraints, the vehicle stops until the obstacle is removed. The test vehicle illustrates the essential functions of an autonomous vehicle, such as post estimation, collision avoidance, path planning, etc. In this respect, it is similar to its big brothers, which SSP has developed for the management of green areas used for sports, or for use on military training grounds, and is constantly developing and expanding for new areas of use. For the control of its vehicles, SSP has specially designed and implemented a robot controller that contains all the necessary elements, in particular the high-precision sensor technology, flexible interfaces and the necessary computing power. Although selected modules have been taken from the ROS 2 open-source project, for example, the majority of the software has been developed in-house, on the one hand to be independent of other software suppliers, and on the other hand to optimize the software exactly according to the requirements. This approach has paid off many times over and proves that SSP has mastered the essential know-how. 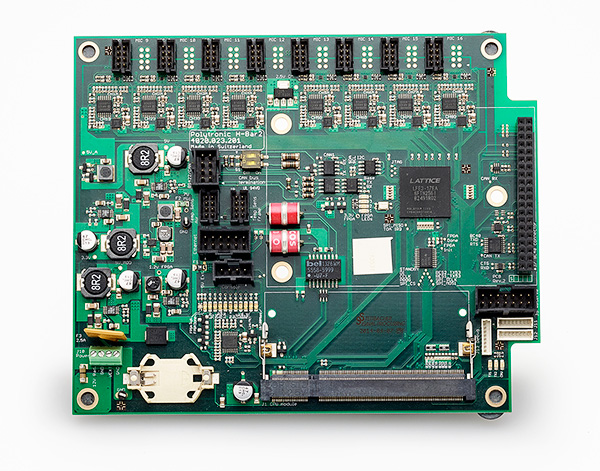 In addition, SSP will show various industrial customer solutions at its booth. The company is particularly proud of its development of a high-precision, non-contact 3D hit detection system for military training. Previously, well-known companies had failed on this project. The success is based on a thorough mathematical analysis of the underlying physical processes in combination with special numerical algorithms for the solution of multidimensional nonlinear systems of equations. As a platform for the device, a compact hardware was developed, which analyzes and evaluates up to 16 absolutely synchronously acquired measurement channels at 500 kSamples/s each in an FPGA. The strategy consisting of thorough analysis and solid technical implementation runs through all activities of SSP and forms the basis for the success and progress of the company and its customers.
Over the years, SSP has continuously expanded its field of activity. For example, 1- and 3-phase digital inverters with PFC for special drives were designed and realized for a customer. These shine with their energy efficiency and compliance with standards regarding mains feedback. Thus, the company managed to enter the field of drive technology up to approx. 10 kW.

Single-phase and three-phase inverters with PFC for standard-compliant drive solutions.

Another important pillar today is image processing. SSP started years ago with the development of its own O-3000 camera series, whose drivers and demo SW are freely available under an open-souce license. Currently, a stereo camera for the recognition and measurement of objects in 3D is being developed. Neural networks and machine vision are used for this, which has opened completely new doors in the direction of AI.
Since its foundation more than 25 years ago, SSP has always kept its finger on the pulse of technology. With 17 employees in the meantime, the company continues to be a competent and reliable partner for demanding technical projects for its customers.