Periodical Signals and Nonlinearities under Control

ILC controllers have been used for quite some time. They are only applicable for periodical set point progression, but they often achieve much better results than classic PID regulators. What’s behind it? Where are the difficulties? The following text gives answers.

The abbreviation ILC stands for Iterative Learning Controller. It’s a matter of self-learning machine control system. The fact that the learning process is called iterative is because in each period of the set point signal the success of the controller is taken into account and based on this the controller adapts itself. 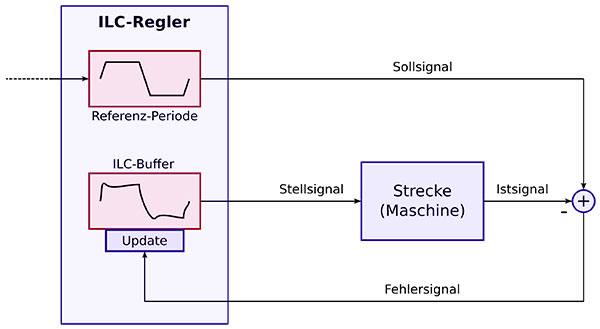 The ILC control loop therefore does not form a (directly) closed control loop at all. The distance is controlled from the ILC buffer, not regulated. This means that (ideally) the control loop cannot become unstable. However, we will have to look at this point in more detail. Playing the control signal from a buffer (instead of direct control) has another very interesting aspect: From the point of view of the track, the control signal can be acausal. Or in other words, the actuating signal can react to behavioral elements of the track before they have occurred. This is possible because the set point signal is periodical by definition and one knows from the past periods at any time in a prospective way how the line will behave, or which errors will occur in the future.

The goal is that the ILC buffer receives a period of the signal that, when sent through the line, results in the set point signal.

Basically, however, the path is causal. This means that it reacts to an excitation (for example to an impulse) not before the excitation, but at the time of the stimulation or afterwards, meaning generally with a certain delay Δt ≥ 0. If one wants the path to execute a certain movement at a certain time T, the excitation for this must therefore take place in the ILC buffer beforehand, at the time T-Δt. The acausal feature of the ILC controller is used here, which we mentioned earlier. The parameter Δt is machine-dependent and must be measured separately. It follows that the ILC update mechanism adds the error signal, or a fraction of it, shifted forward by the time Δt to the content of the ILC buffer.

Anyone who was taught control engineering at school and later wanted or was supposed to apply what they had learned in practice has probably experienced a lot of frustration. The reason for this is that the typical school control technology (or the respective path considered) exhibits linear behavior, and it is precisely this that almost never applies in practice. It is often friction that makes life difficult, the back-and-forth alternation of static friction and sliding friction.

Controlling technology has frustration potential.
The reason often is friction.

However, ILC controllers do not care about this. The individual update is a linear process. In total, however, the content of the ILC buffer does not necessarily have a linear relationship with the set point signal, and as we have shown, certainly not a causal one. This is a very weighty advantage of this method and leads to the fact that ILC controllers achieve results in many applications which would never and not nearly be attainable with a PID-based controller. 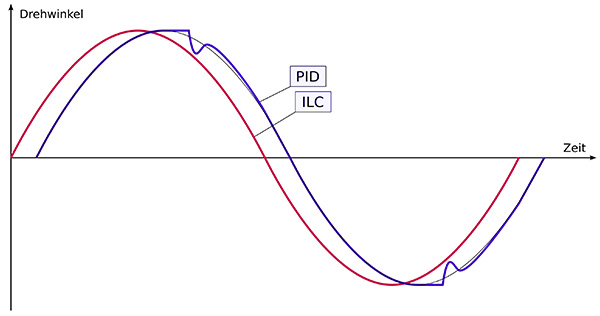 Picture 3 shows the rotor angle of a motor with sinusoidal position control. The red curve comes from an ILC controller, the blue delayed curve was generated by a PID controller. It can be clearly seen with the PID controller that, in addition to the deceleration, shoulders occur at the inflection points. Here, the static friction holds the motor axis. During this time, the I component of the PID controller integrates the growing error until the rotor breaks away and the static friction suddenly changes to the sliding friction, which is much smaller in magnitude. Due to the sudden loss of weight and due to the simultaneously large force which the controller now applies and which it cannot reduce fast enough, the position of the rotor then clearly undershoots. A transient process follows with renewed overshooting until the blue curve returns to the reference curve (black, time-delayed). In contrast, the fully adapted ILC controller succeeds in breaking up the static friction immediately without any noticeable, disturbing overshoot or signal delay. The ILC controller benefits from the fact that it does not work with a slow integrator, but with a stored and optimized control value curve, which can take on any form.