The Crux with Dead Time

If a system is to be controlled that is afflicted with dead time, meaning it always reacts with delay, life can be very frustrating. Standard PID controllers fail or must be set so passively that in the end there is no longer any question of process dynamics. A Smith predictor alleviates the problem considerably.

Otto Smith was a typical inventor. Born in Illinois, USA, in 1917, he studied electrical engineering, received his doctorate and subsequently worked in various companies and research institutes. From 1947 until his retirement in 1988, he was a professor at the University of Berkeley. He was active in the period of great discoveries in electrical engineering and is today one of the most important personalities of that time. He filed about 50 patents and published well over 100 papers in the field of line-side control of electric motors, among others. In this context, he came across the problem of dead time.

A classic control loop is shown in Picture 1. The controller H drives the process, respectively the system G. The disturbance variable z acts at the output of the system G, so that the output y of the system often does not behave exactly as the set point r requires. For this reason, the control error e = r-y is calculated from the set point and actual value, which the controller should make zero. If G now contains a dead time, as is typically the case in thermal processes, in transport and filling systems, but also in many drive applications with backlash or elasticity and friction, the process G always reacts with a delay. This means that the error e is formed from values which do not belong together in time at all. In other words, the controller always tries to compensate for an error that it does not yet know, because it only occurs later. As a result, the overall system tends to be unstable, which means that the controller must be set very weakly, which in turn means that the process reacts only slowly. This is shown in Picture 2. 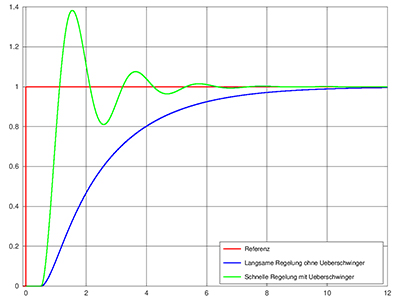 Often H is a PID controller. The advantages of this are primarily that its behavior is easy to understand and comprehend, that there are simple setting rules for good-natured tracks, and that its (limited) capabilities are often sufficient for moderate requirements. With dead time, the situation is somewhat different and the following rule of thumb applies to PID controllers. Where T is the dead time and S is the time constant of the system:

If one tries to find a suitable controller for a system with dead time, one soon finds that the controller would have to have the ability to see into the future. Of course, this is not possible, but with the help of a model one can estimate the future behavior of a system at least in advance. The Smith predictor does just that. The block diagram of a controller with Smith predictor is shown in Picture 3. H again denotes the controller, for example a PID controller. G-T is the behavior of the path, where we now assume that the dead time T and the pure behavior of the path G can be separated without dead time. This is the core of Smith's idea.

For the realization of the controller, Smith now uses mathematical models for G and T. To indicate that they are models, they are labeled G*, respectively T* in Picture 3. The models can be found by a system identification and corresponding transfer functions. With these models the dead time can now be avoided, because with H and G* a control loop without dead time can be formed (left half of Picture 3). The controller H for this loop can therefore be easily adjusted according to the usual rules. So, at this point we simulate the original control loop but without the dead time. Consequently, y0* is a prediction of the true path output y. 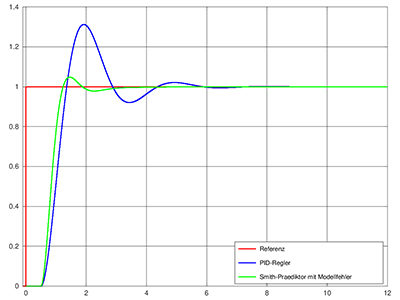 Since the model G* and the estimated dead time T* are usually not perfect, an estimate of y is also made using H and G*-T*. We call it y*. Finally, y-y* is used to obtain the residual control error due to the model error and the disturbance variable z (right side of Picture 3). This residual error is also traced back to the controller H. It can be seen (see Picture 4) that with this topology significantly better results are obtained than with the simple PID controller according to Picture 1. The model-based controlling with the Smith predictor is quite robust against model errors. Nevertheless, the better the model, the better the control performance. This is also the challenge in the realization.

Otto Smith left us a useful tool for dealing with pure dead time with his controller concept. His idea has been further developed in many ways in more recent times, so that in the meantime many difficult cases, even those which are inherently unstable, have become manageable. Stettbacher Signal Processing AG has been active in the field of signal processing and control engineering for over 20 years and is a competent development partner when it comes to modeling physical processes, developing models and solving control engineering problems. The company also offers courses on these topics.